The Official Source for Bloomberg Professional

The Smart Money Flow Index (SMFI) has long been one of the best kept secrets of Wall Street. Almost everyone has heard of “Smart Money”, “Dumb Money” and the so called “Crowd”, and that is exactly what our indicators are all about. Top performing money managers, savvy investors and institutional asset managers are relying on them. One of them is the Smart Money Flow Index for instance, which is also featured on the BLOOMBERG PROFESSIONAL Service under SMART <Index> <GO>.

Just ask yourself these questions: Would you be a buyer if you see that the public and the option market (dumb money) go on a buying spree while the “Smart Money” are heavily short at the same time? Do you know when to part company with the crowd and take profits? The key is to know when the smart guys are trend-following or contrarian. This is exactly what our research is specalized in. We publish the Smart Money Flow Index for free just to give you a glimpse of an idea about the research we offer in our members section. 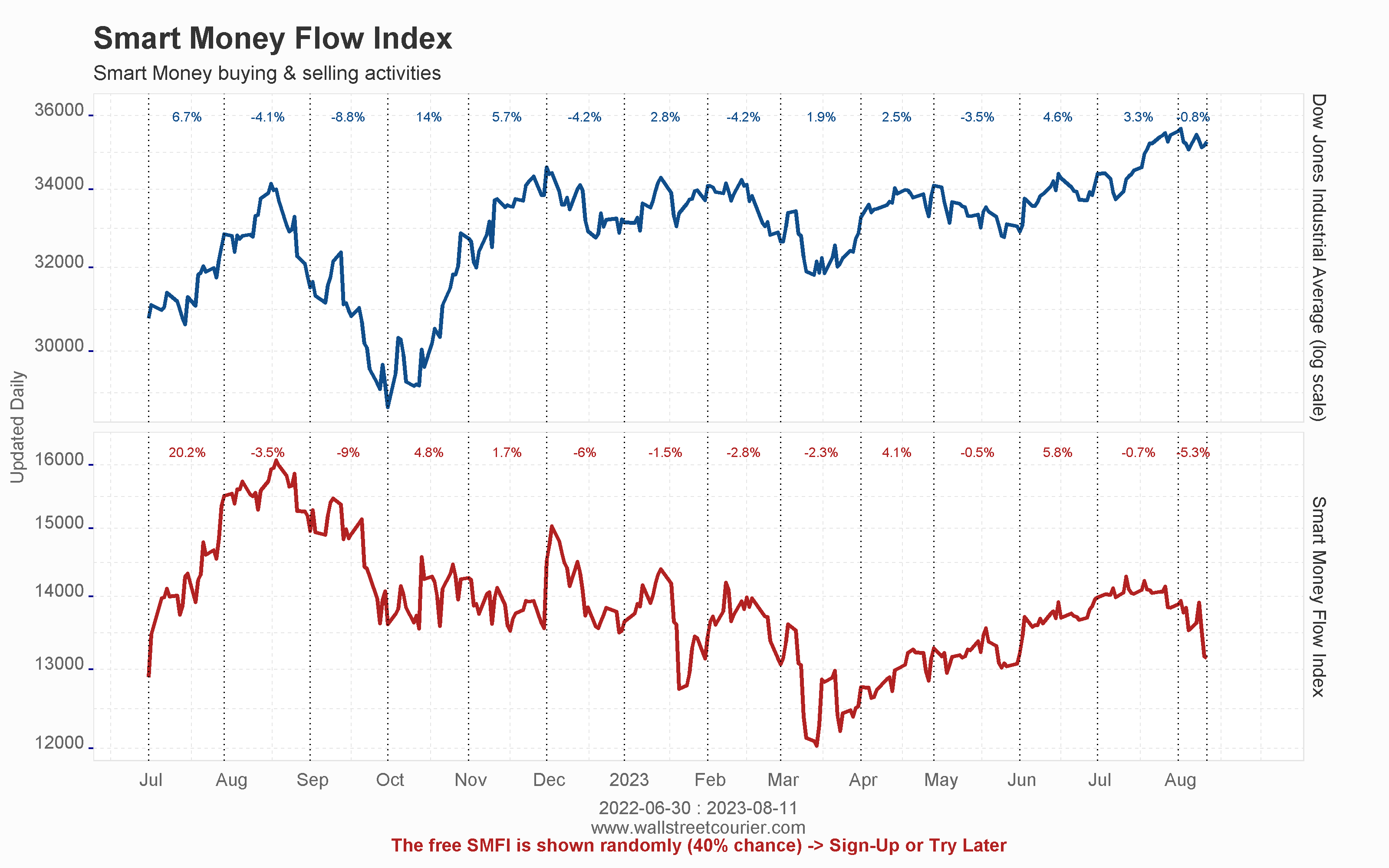 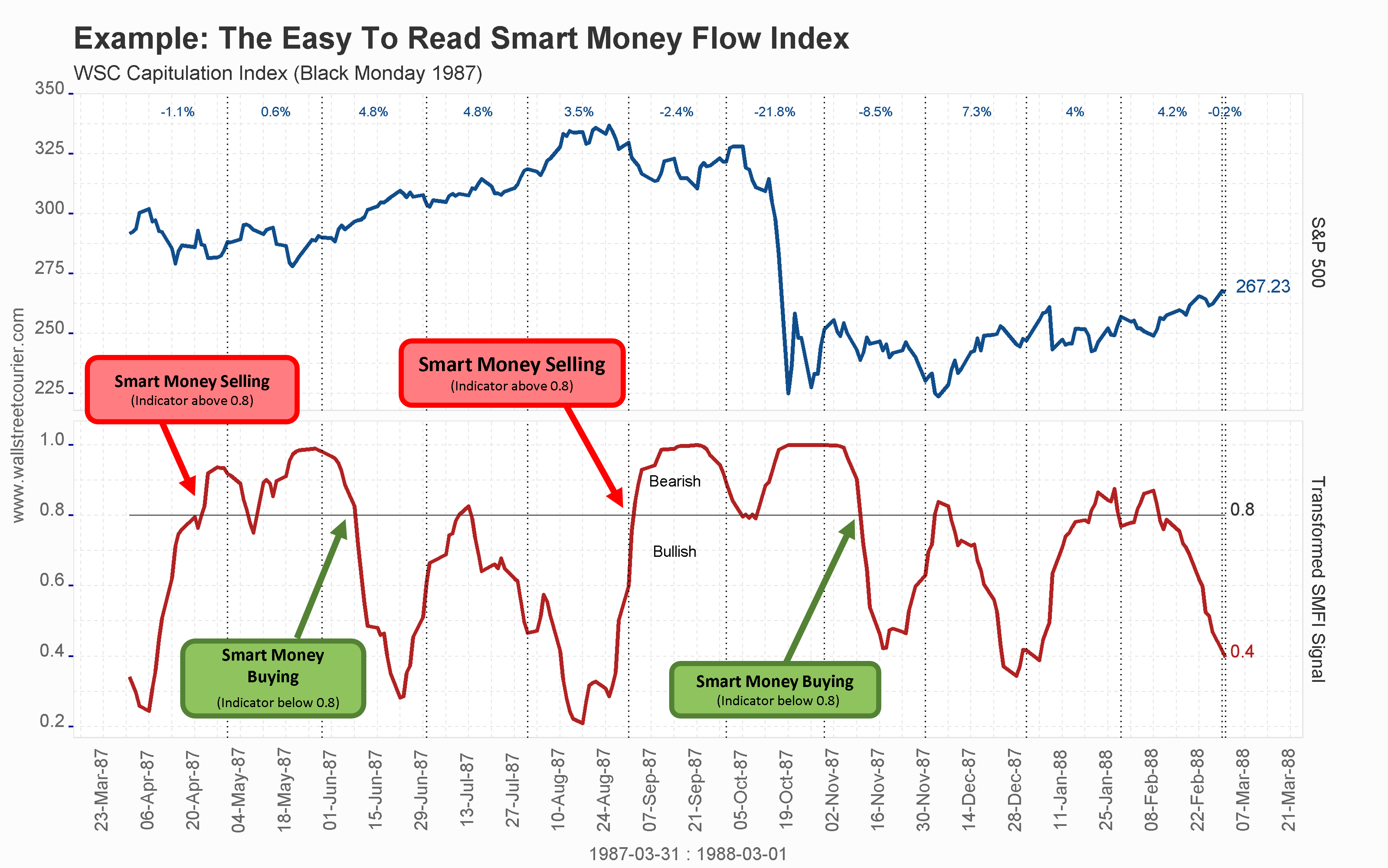 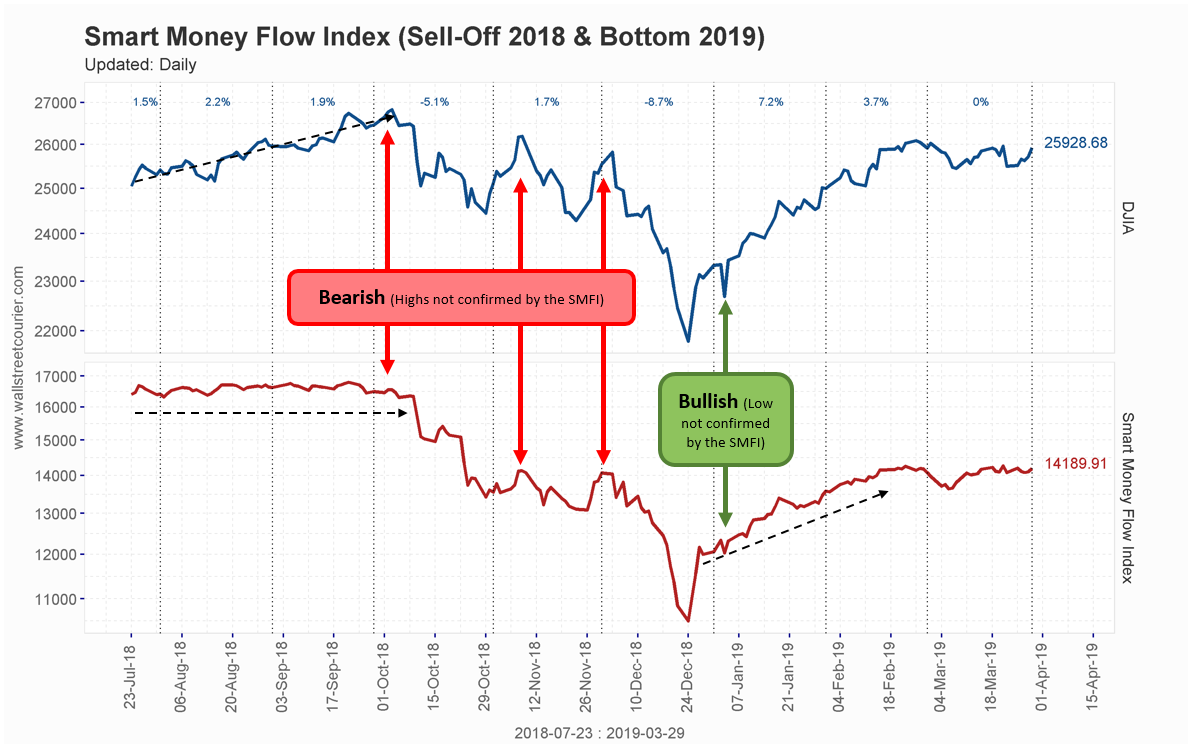 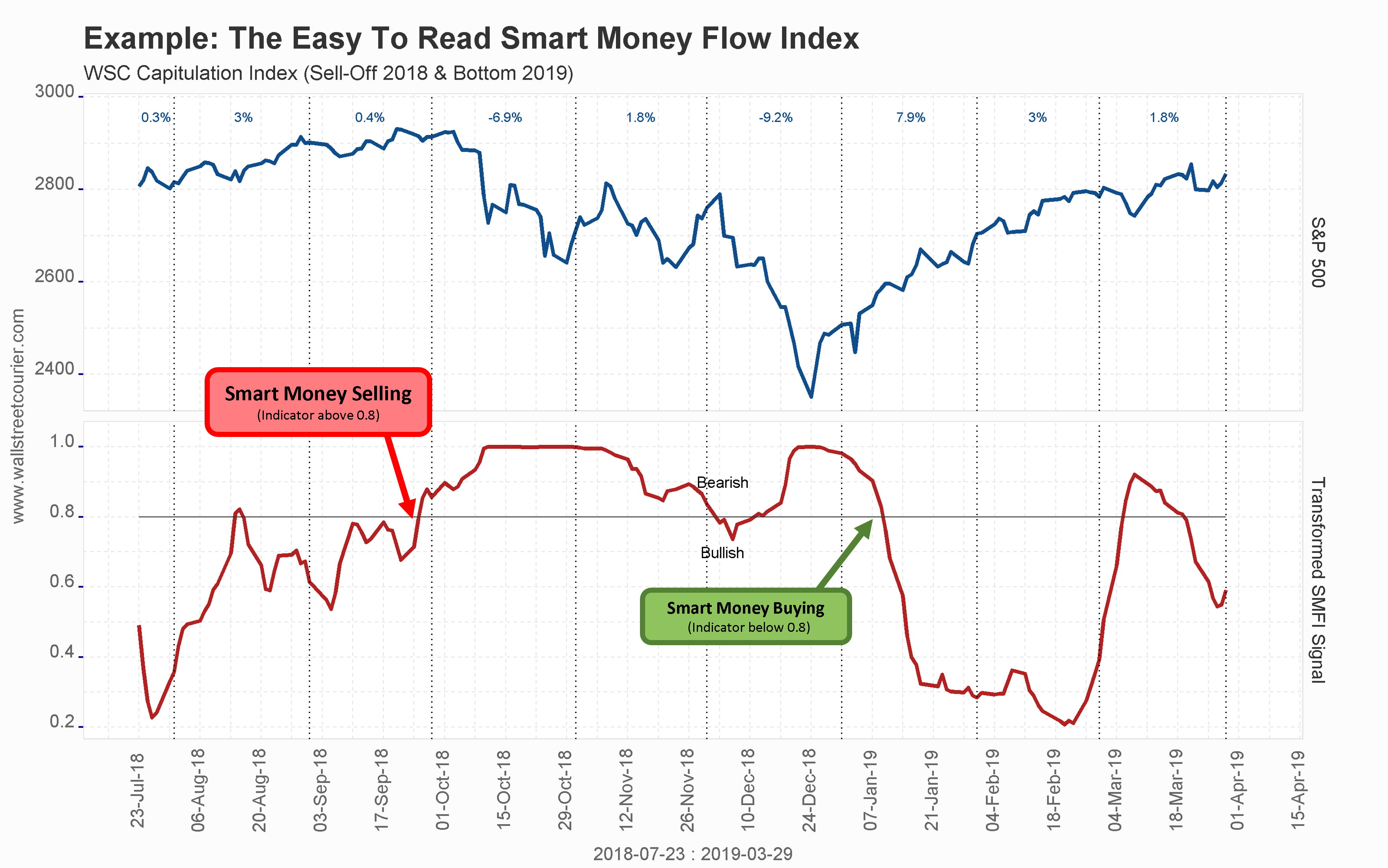 How to Interpret the SMFI?

Troubles in identifying precise entry and exit points? Read the full guide below:

The Easy-To-Read Version of the Smart Money Flow Index:

The Smart Money Flow Index (SMFI) has been featured in many articles. Below, we will provide links to some of them. The articles about the SMFI are interesting and informative, so you should definitely check them out if you have time.

The Idea of the Smart Money Flow Index

Identify the Buying Behavior of Smart- versus Dumb Money

The idea of the SMFI is to identify the buying behavior of Smart- versus Dumb Money in the U.S. stock market. The Smart Money Flow Index is based on the concept of Don Hays’ Smart Money Index (SMI), but uses a more efficient  formula to remove emotional transactions. The SMFI was developed by R. Koch in 1997 and is a trademark of WallStreetCourier.

The Smart Money Flow Index is calculated according to a proprietary formula by measuring the action of the Dow during two periods: shortly after the opening and within the last hour. The first minutes represent emotional buying, driven by greed and fear on the part of the crowd, based on good and/or bad news. During the opening, there is also a lot of buying on market orders, as well as short covering. Smart money typically waits until the end, and they tend to test the market beforehand by shorting heavily in order to gauge the market’s reaction. Afterwards, the big investments are made. These heavy hitters tend to have the best possible information available, and they have an edge on all the other market participants.

Read our Guide to Understanding and Utilizing the SMFI

Follow us on Twitter to get regular updates on the SMFI and on many other trading news.

The Smart Money Flow Index: A Must-Have for Investors!

Nobody Rings a Bell at Profitable Market Regimes – Smart Money Does!

Stay ahead of the market with WallStreetCourier’s expert analysis and tools. Minimize the risk of getting whipsawed, reduce the risk of unfavorable entry points, while maximizing return opportunities. Buy the dips when everybody else is throwing in the towel and exit a trade when everybody believes the market is just taking a healthy breather.

Can you afford to overlook the power of the SMFI?

Stay ahead of the crowd! Click here to see our daily updated Market Statistics

Adapt your trading to market regimes and not to emotions!